The LGC, chaired by Treasurer Folwell and staffed by members of the Department of State Treasurer’s State and Local Government Finance Division, approved 22 multifamily housing projects for nine locations in the fiscal year that ended June 30. That paved the way for 2,993 apartment units to be built or renovated at 17 low-income sites and five senior living low-income complexes.

The $418.5 million represents only projects for which construction has started. The figure does not include general obligation bonds that have been approved but not yet issued.

The LGC has a statutory duty to monitor the financial well-being of more than 1,100 local government units. The commission also examines whether the amount of money units borrow is adequate and reasonable for proposed projects and confirms the governmental units can reasonably afford to repay the debt.

“Helping to ensure the housing stock in North Carolina keeps pace with the population growth and shifting demographics is not something people normally associate with the Department of State Treasurer (DST). But our staff is deeply involved in helping municipal and county housing authorities and others to obtain the financing necessary to build, renovate and add on to public sector housing projects,” Treasurer Folwell said.

“We are in a volatile economic environment still struggling to recover from the government lockdowns during the COVID-19 pandemic. On top of that we are entering a recession amid record inflation. Low-income North Carolinians and seniors on fixed incomes are caught in the crosswinds. Expanding affordable and accessible housing is urgent,” Treasurer Folwell said.

According to the real estate company Redfin, North Carolina housing prices were up 14.4% in June compared to June 2021. The National Low Income Housing Coalition reports there are 347,827 extremely low-income renter households in North Carolina, but there is a shortage of 195,661 rental homes that are affordable and available for renters whose incomes are at or below the poverty guideline. Those poor households can spend more than half of their income on housing, which means they sacrifice other necessities like healthy food, health care and transportation. They are forced to move to less safe neighborhoods and take two or three jobs to pay the rent.

“Creating and preserving affordable housing is imperative because studies show increases in household income are not keeping pace with rising rent costs, and that trend has been occurring for decades,” Treasurer Folwell said. “Housing instability and inadequacy can create stress, lead to depression and foster hopelessness, all of which can contribute to physical health problems.”

As keeper of the public purse, Treasurer Folwell is determined to protect and preserve North Carolina’s Triple-A bond rating, which makes it possible for governments to obtain lower interest rates when borrowing money. Low-interest debt makes it possible to spend more on capital, such as public housing and infrastructure needed to serve it.

The LGC staff analyzes debt packages sought by county housing agencies across the state for their own housing projects, or projects requested by the N.C. Housing Finance Agency, which issues bonds as a conduit for an affordable housing developer. Money can be used for multifamily track allocations or, under some programs, to create home equity or provide down payment assistance for first-time homebuyers. 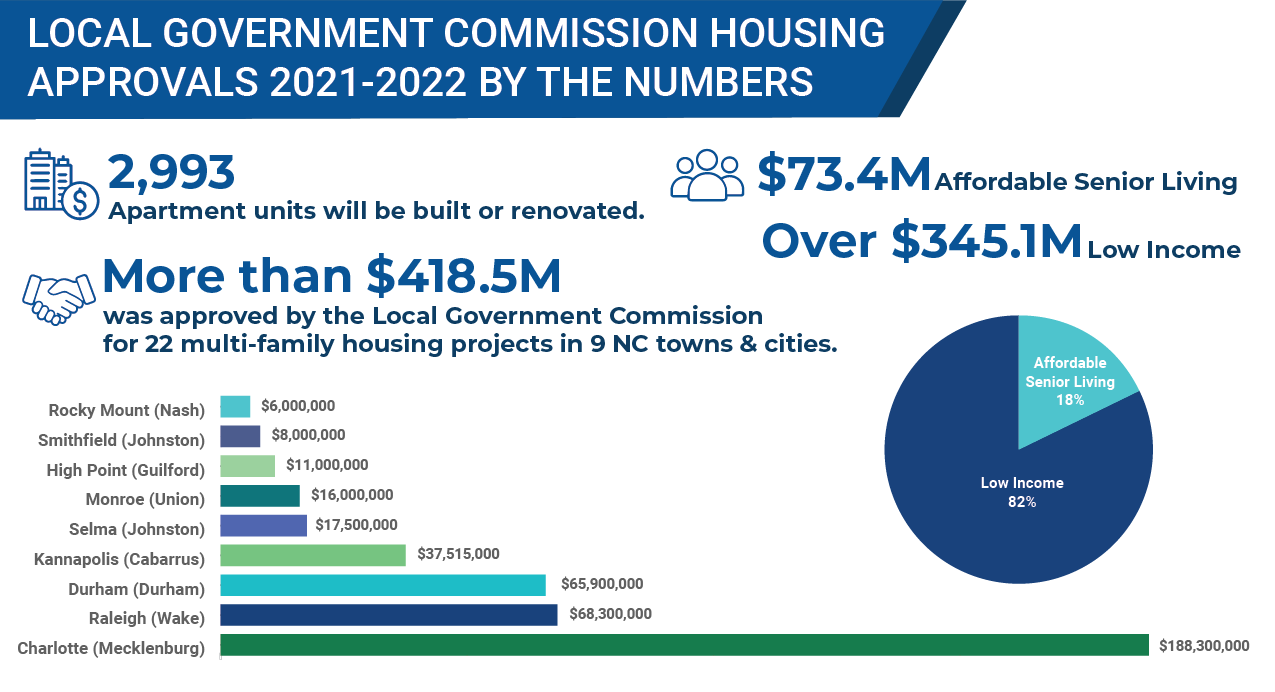