“There is no workaround for environmentally safe infrastructure and treatment plants that are essential to avoid public health risks while boosting the potential for economic growth,” Treasurer Folwell said. “Charlotte officials are making an important investment in vital public works. The Local Government Commission is pleased to assist with their efforts.”

“Charlotte and North Carolina continue to grow and attract new residents and our municipalities must work to keep pace. Charlotte Water is an integral part of the regional economy, so I appreciate the work of the Local Government Commission and its approval of these funds,” Jones said. “The funds will go towards important infrastructure projects for the benefit of our community that support the growth of Charlotte-Mecklenburg as well as to support the continued exceptional regulatory compliance of the utility. The city looks forward to continuation of this partnership to build a better city, Charlotte Water and region.”

Treasurer Folwell chairs the LGC, which is staffed by the Department of State Treasurer (DST). The commission has a statutory duty to monitor the financial well-being of more than 1,100 local government units. The commission also examines whether the amount of money units borrow is adequate and reasonable for proposed projects, and confirms the governmental units can reasonably afford to repay the debt.

Charlotte will issue $500 million in bond anticipation notes that allow the city to obtain short-term funding over the next two years that will be paid off later with long-term bonds. The money will pay for the extension of existing water and sewer lines, rehabilitation of water and wastewater treatment plants, new water and sewer mains and equipment.

The city also will issue another $535 million in revenue bonds to finance water, wastewater and sewer plants and lines. Part of that would pay for previous bond anticipation notes and to refund a previous bond issue.

Water and sewer rates are expected to increase 3.84% annually from 2023 to 2027 to help fund the city’s overall Capital Improvement Program that includes the items approved on Tuesday.

Treasurer Folwell said most North Carolinians are aware of the billions of dollars in capital funding needed for projects such as new school and other government buildings, ports, airports, bridges and roads.

“There’s at least the same amount of funding needed for infrastructure below the ground,” Treasurer Folwell said. “At the Department of State Treasurer, we vigorously protect the state’s AAA bond rating, which allows local governments to obtain low-interest rates when they take on debt, freeing up more money for construction. Our staff works diligently to work out the financing, and to cooperate with the local governments to ensure taxpayers are getting the best deals.”

The American Society of Civil Engineers’ 2021 Report Card for America’s Infrastructure determined that North Carolina has $16.8 billion in drinking water needs over the next 20 years, and $5.3 billion in wastewater needs.

Other drinking water and wastewater items on Tuesday’s LGC agenda also were approved, most notably more than $210 million in Viable Utility Reserve grants for nearly 50 local governments. The grants will fund asset inventory and rate assessments that lead to short-term and long-term action plans, and for projects to repair, maintain and manage public drinking water and wastewater systems.

Session Law 2020-79 that went into effect in 2020 created a Viable Utility Reserve fund to improve and sustain water and wastewater systems. It required the LGC and State Water Infrastructure Authority (SWIA) to develop criteria to identify distressed units.

In other action, the LGC approved a request from Buncombe County to issue $70 million in general obligation bonds. Of that, $40 million would support low-income rental housing and home ownership programs to address a lack of affordable housing in the county. The other $30 million would be spent to preserve open space and farmland with the potential to develop greenways and trails for recreational purposes.

The city of Concord (Cabarrus County) was given a green light for $60 million in general obligation bonds to pay for parks and recreational facilities in underserved neighborhoods and to improve existing facilities. The work will include three new parks, trails, shelters, greenways and athletic fields, and expansion of services and updates to older parks.

The LGC approved a request from the Cumberland County Industrial Facilities and Pollution Control Financing Authority to help Cargill food corporation procure $27 million in revenue bonds to build and equip an agricultural recycling facility. The plant will process residual byproducts from Cargill’s Fayetteville soybean processing plant into feed products rather than disposing of them in the landfill. About 70 jobs would be created through 2028.

The town of Waxhaw (Union County) received approval for a $21 million installment purchase contract to build the new Town Campus project to replace outdated town buildings and provide additional space. An installment contract allows the town to take possession of the property and pay for it over time. The project includes a new Town Hall to house the town administration and council chambers, public services administration, storage and work bays, and a site pad for a future town facility.

LGC members voted in favor of a $9 million installment contract request from Fuquay-Varina (Wake County) to pay for a 15,898-square-foot building to house the Fire Department and Emergency Management Services. The project includes dormitory areas, day rooms, training and other space.

Wayne County officials’ request for an $8.1 million installment purchase contract was approved. The county will use the money to build the 118,000-square-foot Freemont Elementary School to house 750 students. The county anticipates using a $30 million needs-based state lottery grant on the project.

Bladen County also plans to build a new school and the LGC signed off on a $4.4 million installment purchase contract to construct the 83,348-square-foot building. The Tar Heel School would combine Tar Heel Middle and Plain View Primary schools, and house 800 students in grades K-8. The county will use $32 million in needs-based school grant funds to complete the project.

Holden Beach (Brunswick County) got the thumbs up from the LGC for $4.2 million in special obligation bonds to replace 1.5 million cubic yards of sand lost during four major storms that raked coastal beaches. 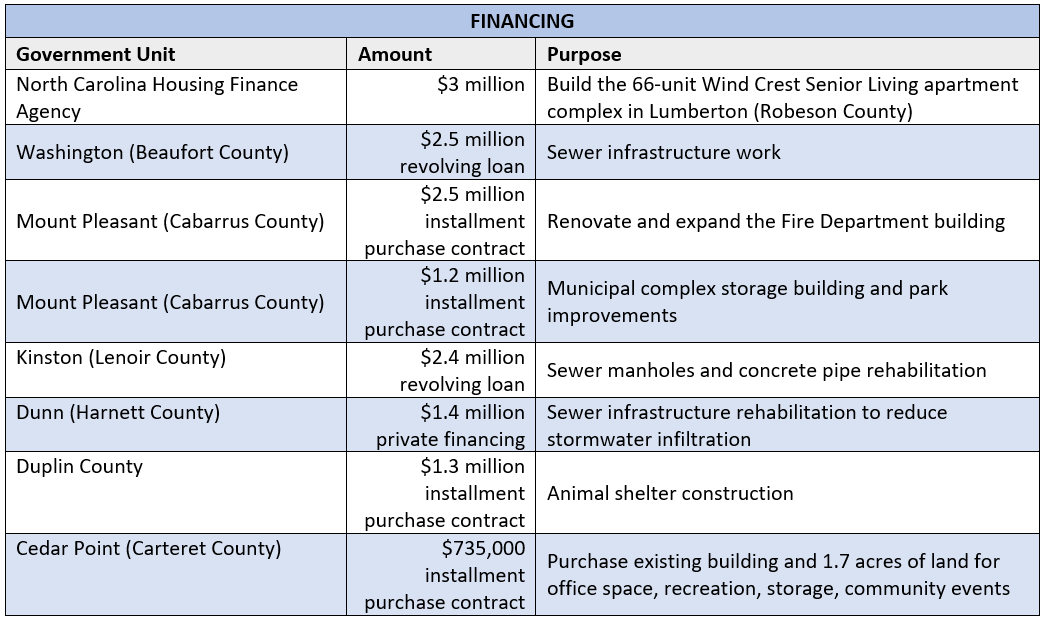