(Raleigh, N.C.) – The Local Government Commission (LGC) has approved a request by the town of Clayton to seek an $80 million revolving loan provided by the state of North Carolina for a sewage treatment facility to accommodate rapid residential growth and industrial demands. But first the town and two major industrial users must reach agreement on protecting ratepayers should the industries’ usage demand — and payments — significantly decline from projections.

The LGC granted the conditional approval Tuesday, Sept. 14, following a $15 million loan approval late last year. The LGC is chaired by State Treasurer Dale R. Folwell, CPA, and staffed by the Department of State Treasurer (DST). The commission has a statutory duty to monitor the financial well-being of more than 1,100 local government units. The commission also examines whether the amount of money units borrow is adequate and reasonable for proposed projects, and confirms the governmental units can reasonably afford to repay the debt.

Clayton’s population has increased 79% from 16,116 in 2010 to 28,843 today. That growth, the burgeoning needs of industries such as Novo Nordisk and Grifols Therapeutics and the impending expiration of treatment agreements with Raleigh and Johnston County prompted the town to expand its wastewater treatment capacity. A new advanced biological treatment facility will replace the aging Little Creek facility. Together with other work the project cost is now estimated at $175 million.

Novo Nordisk is a Danish pharmaceutical manufacturer that produces medications to help control blood-sugar including an oral diabetes tablet. Grifols is a Spanish plasma-based therapy company. Both their production processes are water intensive. The new project will provide treatment capacity up to 6 million gallons a day, with the ability to expand to 10 million gallons daily.

Among other conditions, the loan approval requires those two industries to sign final contracts by Oct. 15 defining how to calculate their financial obligations. Those obligations must include protection to town ratepayers from excessive rate increases in the event the industries’ need for wastewater treatment decreases or is no longer needed. Under current plans, the average residential bill would increase from $88.49 to $114.44 in 2026.

Also approved at the meeting was a request from the city of Charlotte (Mecklenburg County) to finance $125 million in limited obligation bonds to buy a police helicopter, build three new police stations and one new fire station, and acquire land for future fire stations. The money also would be used to renovate the animal care and control facility, and pay for other capital building improvements and a new fleet repair station. No tax hike is necessary.

Among other requests on the agenda, the town of Garner (Wake County) received approval to seek $69 million in general obligation bonds, of which $35.5 million would be used to acquire and construct new parks and greenways, and improve existing ones. Spending on new streets, bike lanes and sidewalks would be part of another $24 million in spending, and $6.5 million would pay for construction and expansion of new and existing fire, police and emergency services facilities. Another $2.9 million would be spent on stormwater improvements. A property tax rate increase of up to 2 cents per $100 in valuation might be required to fund the debt service.

The town of Morrisville (Wake County), whose population has exploded 68.9% from 18,745 in 2010 to an estimated 31,670 today, received LGC approval to issue, pending voter approval, $37 million in general obligation bonds that might require a property tax increase of up to 3 cents per $100 in valuation to fund service on the debt. Improving existing parks and recreation facilities and building new ones would be part of $17.3 million in spending, with $11.7 million spent on transportation projects including streets, sidewalks, bridges and bicycle lanes. Another $8 million would be used to build a new fire station, and fund other public safety improvements.

Lincoln County got the green light for $20 million in financing to build a 52,863-square-foot building to house Emergency Medical Services, Emergency Management and Fire Marshal operations. No tax hike is planned.

Nash County plans to build a new detention center consisting of two housing units with a total of 94 beds. The LGC approved $16 million in financing for the project, with no tax increase anticipated.

Mount Holly (Gaston County) was cleared to seek $13.55 million in general obligation bonds, with a property tax increase of up to 7.5 cents per $100 anticipated to cover debt service on the bonds. The money would be used to acquire land to connect the city’s greenway system and for future parks.

The LGC approved requests for financing from the city of Shelby (Cleveland County), $10 million for streets and sidewalks; Vance County, $5.1 million for maintenance projects at multiple schools; Dare County, $3 million to purchase land for a future EMS station and youth center; the city of Brevard (Transylvania County), $2.35 million to build a new community center building and parking lot; and Elizabethtown (Bladen County), $2 million for 18.5 miles of street repair and resurfacing. 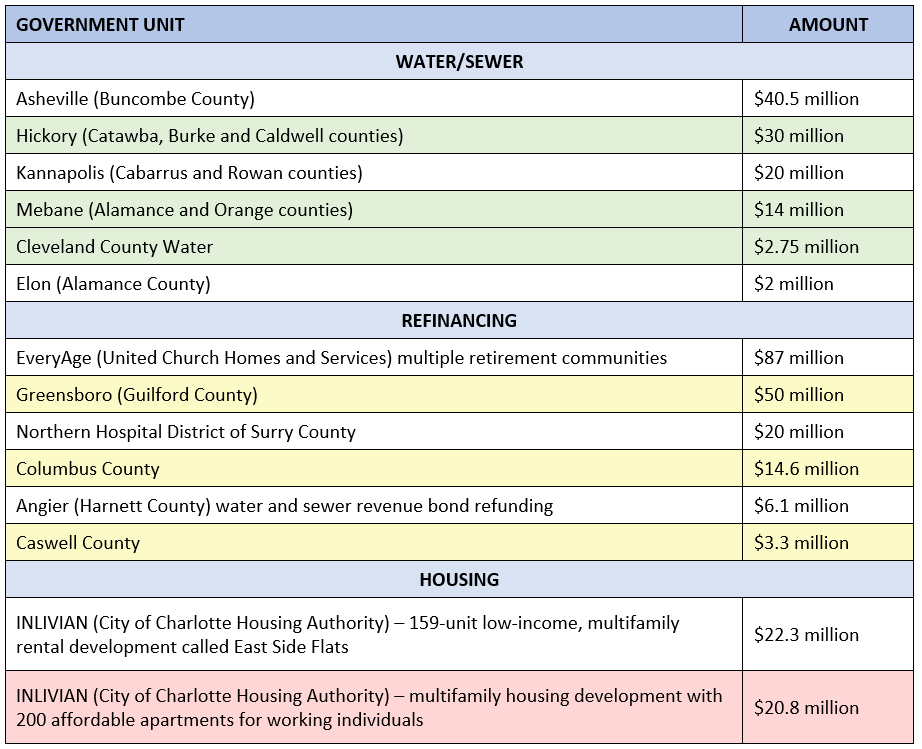