(Raleigh, N.C.) –The Local Government Commission (LGC) has approved up to $3 million to assist 15 local government units in assessing and inventorying their water and sewer assets as part of a process to determine long-term viability needs. The studies could lead to more cost-effective and efficient regionalized services.

The LGC, chaired by State Treasurer Dale R. Folwell and staffed by the Department of State Treasurer, has a statutory duty to monitor the financial well being of more than 1,300 local government units. The commission has wrestled for years with underfunded and aging water and sewer systems across the state that threaten government fiscal stability.

On Tuesday, July 13, the LGC approved grant applications to assess and inventory utility assets for 15 local governments classified as distressed in Cleveland, Martin and Wayne counties. Money for the grants comes from the legislatively created Viable Utility Reserve (VUR) program. Its goal is to provide funding to help distressed units solve water and sewer problems, and assist the utilities in finding solutions that will allow them to become financially sound and viable in the long term.

“This action is an important commitment to protecting public health, sustaining the environment and providing clean drinking water,” Treasurer Folwell said. But the approvals came with a strong admonition from the LGC for local governments and utility systems to be judicious in spending no more of the grant money on studies and consultant fees than is necessary, while striving to make necessary improvements and maintain reasonable customer rates.

“This is about the invisible — the low-income and fixed-income people who are one utility bill away from getting swept into a financial vortex from which they can never recover,” Treasurer Folwell said.

The grant applications were approved for: 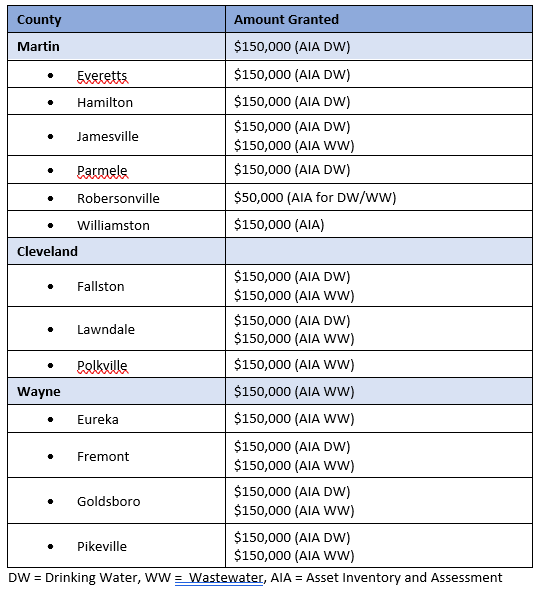 In other agenda items, the LGC approved $51 million in limited obligation bonds for Surry County to build a new 360-bed detention facility that allows for future expansion to 450 beds, a 911 communications center and a magistrate’s office. An old gymnasium with classroom space shared by Elkin High School and Elkin Middle School will be renovated, and a new gymnasium for Elkin schools will be built. There will be no tax hike to pay for the work.

Caldwell County received permission to take on $3.7 million in debt to replace the county animal shelter. No tax hike is anticipated.

The city of Monroe (Union County) got approval for $16.75 million in limited obligation bonds to build a 33,000-square-foot police headquarters and 21,000-square-foot senior center. No tax increase is planned.

The Village of Bald Head Island (Brunswick County) plans to erect a 17-unit storage building with office space for the village’s Contractor Services and Development Services Department, install fuel pumps and add parking spaces after getting approval for $1.68 million in financing.

The city of Durham (Durham County) was given a green light to issue a long-term revenue bond for $263 million. It replaces a short-term bond anticipation note that was used to pay for previous water and sewer projects, and to perform remaining capital projects.

The town of Chapel Hill’s (Orange County) financing application for $59.2 million was approved. The town plans to build an 1,100-space parking deck on Rosemary Street with 40 electric charging stations, to perform street improvements to Elliott Road and to refund existing debt at a lower interest rate.

The town of Apex (Wake County) secured permission for $42 million in general obligation bonds for street and sidewalk facilities to relieve congestion caused by continuing rapid growth. The borrowing now goes before voters for approval in a November referendum. Apex is one of the fastest growing municipalities in the state. A property tax rate increase of 3 cents per $100 is anticipated if the referendum is approved.

The town of Holden Beach (Brunswick County) was approved to seek a $27.7 million special obligation bond for beach renourishment to replace sand along 4.1 miles of shoreline lost due to four storms. State and federal disaster relief grant funding will be used to pay off the bonds, which are being used as short-term financing.

The N.C. Medical Care Commission had two revenue bond applications before the LGC. One was for $65 million to finance and refinance the expansion and renovation of Arbor Acres United Methodist Retirement Community in Winston-Salem (Forsyth County). The other was to refund $45 million at a lower interest rate for work done at Aldersgate United Methodist Retirement Community in Mecklenburg County. Both were approved.

Other financing was approved for: 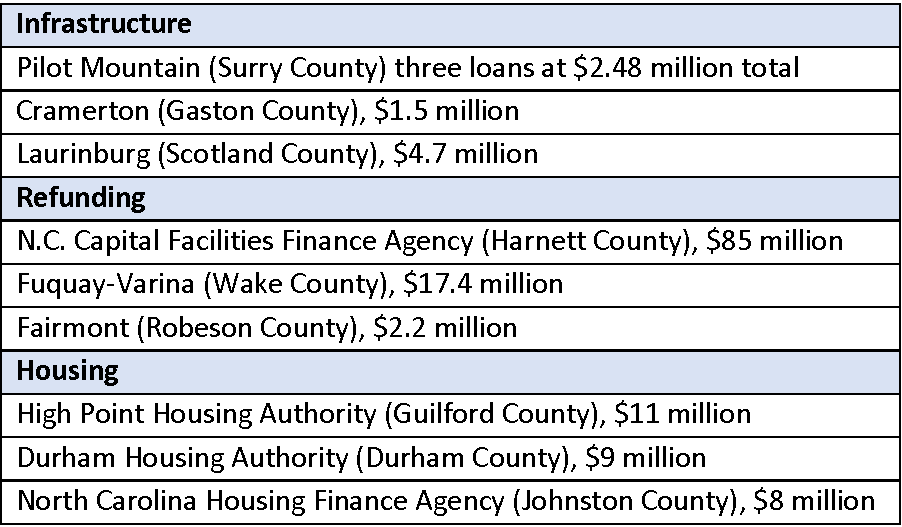